This fresh-thinking French cruiser-racer aims to be all things to all sailors … spacious, gracious, easy to handle and sporty.

Remember the days when a phone only had to make phone calls? When a hatchback simply had to ferry your kids, not emulate a Ferrari on the Nürburgring? And thongs could be thongs, not orthotic aids that also open your beer? Honestly, we expect so much from stuff these days that, if modern cruiser-racers had emotions, they might need to lie on a couch for a quick psych session.

In the Dufour 470’s case, to please everyone it has more personalities than Sesame Street, more functions than a Swiss Army knife. Even Dufour describes it as “much more than a sailing boat”. In the yacht’s future is everything from bareboat charter work to deep bluewater cruising. Inevitably, too, the siren call of competition will see it at twilight races sporting carbon sails and a steely crew. 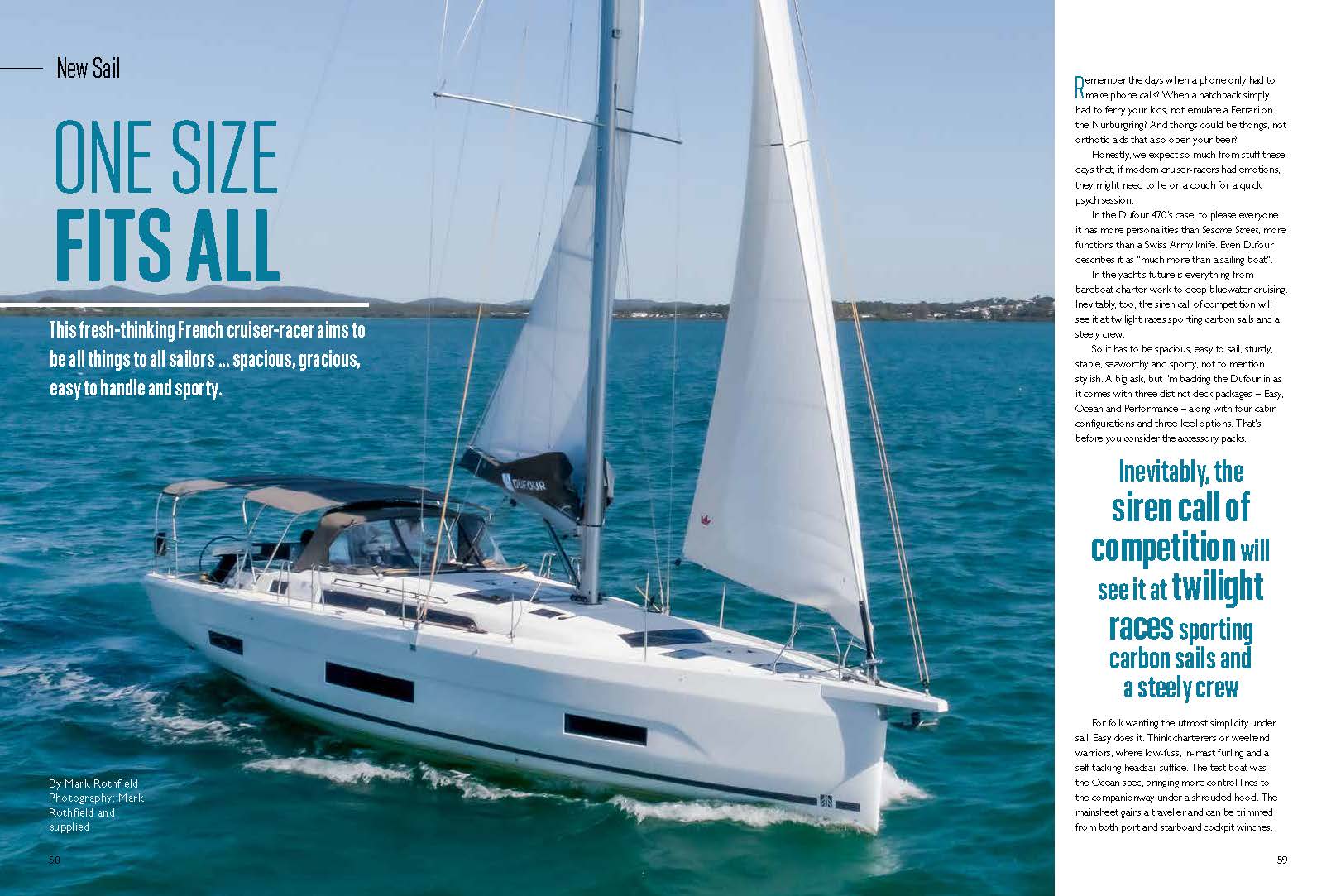 So it has to be spacious, easy to sail, sturdy, stable, seaworthy and sporty, not to mention stylish. A big ask, but I’m backing the Dufour in as it comes with three distinct deck packages – Easy, Ocean and Performance – along with four cabin configurations and three keel options. That’s before you consider the accessory packs.

For folk wanting the utmost simplicity under sail, Easy does it. Think charterers or weekend warriors, where low-fuss, in-mast furling and a self-tacking headsail suffice. The test boat was the Ocean spec, bringing more control lines to the companionway under a shrouded hood. The mainsheet gains a traveller and can be trimmed from both port and starboard cockpit winches.

Design input for the 470 emanated again from Italy’s Felci studio. Umberto Felci is a man who prefers the term ‘optimise’ to ‘compromise’, and in his own words: “We tried to find a way to balance all the elements and mix them to the best.”

Inspiration was drawn from the new-breed Mini-Transat and Figaro pocket rockets, along with others of the voluminous, inverted-bow ilk. Here’s why: the fuller sections in the bow offset the wide beam that’s carried well aft, generating lift over waves rather than cutting through.

The hull is beamy by mono standards – 30cm wider than a TP52, for example. And, voila, the space gain for both the fore and aft cabins is tremendous.

Inherent form stability is also the cruiser’s friend – extra power, fewer sail changes, more comfort. Wetted surface area is not, especially in light airs, so Felci gets around this by having an above-waterline chine and generous rocker.

The standard keel draws 2.25m and there’s a shallow-draft option or a performance keel (2.7m). Twin helms link via cable to a single rudder, the latter being positioned forward to avoid lifting as the hull heels. While they’ve used vacuum infusion to save weight, the Dufour still displaces around 2000kg more than its nearest competitors. Then again, there’s a helluva lot of hull here.

Videos show the Dufour sailing handsomely in 20 knots, as it should. Unfortunately, for our test, a pesky westerly dampened the predicted nor’easter and left barely 8 to 10 knots of wind. Nemesis for a full-bodied yacht like this? No.

The 470 managed 5.6 knots on a tight fetch and spun effortlessly with the self-tacking headsail, while maintaining a nice positive helm feel. You won’t be motoring often, I suspect, but there’s a Volvo 60 with saildrive, accessible from the stairs and either side. It’s highly manoeuvrable when reversing into berths.

The deck-stepped rig looks darn near bulletproof as the chainplates are gunwale mounted to create a wide shroud base, supplemented by fixed backstays and twin aftswept spreaders. Deck gear is Lewmar. The jib runs on a low-profile furler with tape drive, while the boom is set quite low, so you don’t have to be a basketballer to reach the lazy bag.

Sometimes it’s the little things that matter on a big yacht. For example, there’s an opening between the dodger and bimini for easier access to the side-decks and a clear view of the main. A floor panel beneath the skipper’s feet can be hinged to create a more level platform when heeled.

The davits are so elegantly engineered, you’ll just have to tick the options box. Handling up to 100kg, they hinge outwards but can be fully retracted once the tender is dispensed with.

A large under-cockpit lazarette houses a genset, watermaker and additional air-conditioning units, all of which were owner specified. Other options include a retractable bowthruster, genoa tracks, electric halyard winch and Raymarine instrumentation (part of the Offshore pack).

Inside the transom moulding is a gas barbecue and sink with hot-cold freshwater, so you can cook from the boarding platform, largely out of the breeze. Moving below, having the L-shaped galley positioned forward takes a moment or two to get used to. Feeding the cockpit means carrying food across an open-plan saloon rather than simply handing up the companionway. You wonder about doing this when heeled, but right where you need them are handholds or furniture.

On the plus side, space often wasted against the main bulkhead is utilised for overhead cupboards, and the galley gains from having drawer fridges to starboard. Niceties include Corian tops, twin sinks, three-burner gas stove, a saltwater rinse tap and an owner-fitted microwave running off a 3000W inverter.

On the standard three-bedroom layout, the day head is immediately to port of the companionway, and amidships is a two-seat longitudinal settee. The dinette is to starboard, offering wrap-around seating.

Aft cabins are exceptionally generous and the owner’s island berth in the vee stateroom is kingsize. Here, you can recline and look out the topside windows or up through a deck hatch to the rig.

The ensuite shower and toilet compartments are separated for better space usage. Conspicuously absent is the sound of wavelets slapping the hull, as there’s a full bulkhead and foredeck lazarette immediately for’ard. Truly, the cabin is powerboat-like in its width, headroom and visage.

You can have the 470 in a five-cabin layout, where the bow cabin is divided and there’s a Pullman cabin and twin aft cabins, but most will prefer the three-cabin variant.

Teak is standard but I liked the test boat’s creamy oak interior, especially when they’ve added so much natural light.

It’s a pretty impressive vessel, whichever way you look at it (except, perhaps, from directly bow-on in my humble view). Local demand is high and Australian importer The Yacht Sales Co has forward-ordered 10 new 470s … what ‘personality’ you choose for your boat is still up to you.