What’s in a name?

THE DUFOUR 56 HAS A HERITAGE TO TRADE ON WELL BEYOND ITS EXCLUSIVE TAG. 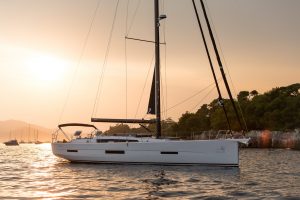 IT has been four years since Dufour orchestrated a management buyout and set out on a path of reinvention. A successful ride in that short time has lead to the launch of the ‘Exclusive’ range last year.
The idea behind the name is to build yachts that would live up to such a classy title but still ostensibly be an ordinary production yacht. To do the name justice the range consists of larger yachts and the 63 was the first launched by Dufour. This latest 56, therefore, is designed to take what it can from the 63 and make the exclusive tag more available to cruisers. The intention, therefore, is to provide a large yacht with as much space, comfort and luxury as they can squeeze into the hull shape, but keep the yacht sailable by owners; i.e. without paid crew. Underlying that philosophy the yacht must come with an accessible price. 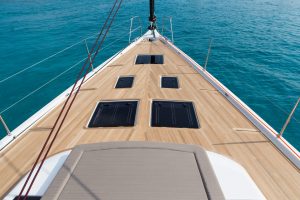 The side steering stations have excellent viewing over the top of the cabin due mainly to the shallowness of the cockpit. Any safety concerns one might have with a shallow depth cockpit is negated with some sensible design. Firstly the coamings are both high and broad, providing good back support and a broad platform to obtain secure footing. The side decks are also plenty wide enough with the beam carried well aft. Behind the steerer the transom seating is a good 600 millimetres across the stern, possibly the widest platform I have seen. Just in front of the transom but behind the steerer are two electric winches for the German mainsheet system. The traveller runs laterally forward of the companionway across the cabin top. Two smaller winches are just forward of the steering wheels for the self-tacking jib. Jammers on the side deck allow the mainsheet to be jammed so when the big headsail is unfurled
you can trim the sheet on the electric winch.

All the rope tailings for the sheet winches and the halyard winches either side of the companionway can be stowed away under lifting hatches in the teak cockpit floor. While this makes the cockpit a nice clean and safe area to move around, the lifting lids can get jammed if you do not stow the rope properly. Not a big problem, just an annoyance. The split backstay comes down to both aft corners but does not interfere with any of this sail trimming or steering. It is mechanically adjusted with a ram on the port side. All the stainless wire rigging is of a good oversize for the 9/10ths rig with two sets of swept-back spreaders.

Just off centreline to port at the steering position aft is a huge lifting hatch. This provides access to the dinghy garage underfoot. The supplied tender only needs a little deflating of its nose to fit in sideways into the possy. There is still plenty of room on the starboard side to include a generator and/or watermaker. Entry to the full width, drop-down transom is on the starboard side with the rest of the transom housing the outdoor barbecue, a sink and cutting board at a perfect height for working on from the transom.
A drop-down ladder is neatly folded into the transom swim platform so no toe stubbing here, or tripping over by an energetic outdoor chef.

The engine batteries sit just forward of the engine
and the house batteries are easily found underneath
the centreline seat in the saloon. Both areas include
space to place more batteries if required.

BUT IT IS GOOD TO SEE A PROPERSIZED
NAV. STATION.” 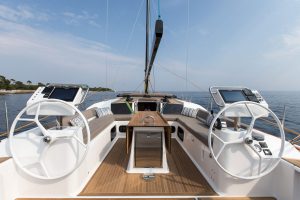 Back in the cockpit I noted that there is a dropdown leaf on the port bench seat. Not only can this be pulled up level to widen the bench into a lovely cushiony day bed; it can also be raised further to provide a solid lee-cloth for an on-deck pilot berth. Perfect for those long, balmy nights on watch. To add to the ambience the aft post of
the cockpit table is a perfectly-sized little refrigerated unit for the bubbles or whatever. By the way the boom is well over two metres above you so there is plenty of space for biminis and basketball players.

As well as being able to snooze in comfort in the cockpit, there are multiple options available on the deck as well. Cushions galore
are available to lay out a day bed across the top of the cabin under the vang; or a nice sloping tanning bed forward of the mast.
On the bow the twin furling headsails, selftacker aft and large headsail forward, are well forward on the bowsprit through the open pulpit. The electric windlass is sunken and the locker aft of it is deep and wide to take any manner of deck gear. The teak deck is ever-so slightly cambered and runs to a low toe-rail bulwark. LED lights are recessed into the bulwark enhancing nighttime ambience plus adding a safety factor at night. There are several deck cleats in all the right spots and gates in the lifelines on both sides.

This appears a nicely balanced hull from Umberto Felci. There is the slghtest hint of a low chine but it is the beam that really provides the hull volume and it carries well aft. Under the water it looks a smoothly rounded shape, in profile view, that would revel in the ocean swells, both upwind and down. A little stern overhang ensures a smooth break off the transom from some powerful, broad stern sections. We hit all the numbers on the polar prediction
program in light airs one morning. Beating into seven knots of true we smoothly sat on over six knots of boat speed just 34° off apparent. This was using the smaller, self-tacking jib. Once you unfurl the large headsail and bear off to around 45° the numbers really jump significantly. We could hit theoretical boat speed
of just over nine knots in just ten knots of true wind speed at 85° apparent. Fingertip control.

Standing at the helm it does look a bit like you are steering an aircraft carrier with its wide beam, low cabin top and near flat decks. But the Dufour 56 handles like a much smaller yacht.
The good light wind performance might  come from its large sailplan matched to a comparatively light displacement. This is countered by a deep draft on a broad keel, bottomed with a torpedo L-bulb. Whatever, it is slippery and its polar numbers show the
Dufour 56 will handle the heavy airs just as well. Apparently the brief was to provide maximum performance with little effort and the Felci studio appear to have hit the mark.
Dufour have also ensured this yacht will take the long voyages. It includes a massive 500 litre fuel tank for its 82 kilowatt Volvo Penta engine.
This should ensure around 120 hours of motoring at cruising revolutions. Performance Cruising Yachts say it will also sit nicely on its theoretical hull speed for nearly a full day at 3000rpm.
Down below, the engine room behind the companionway steps has plenty of headroom. Insulation lining the box is possibly the thickest
I have seen and this equates to excellent noise deadening in the cabin when motoring. The battery switches are at the base of the steps.

Beautiful teak decking as you would
expect from Dufour.

The height of the cockpit floor means
vision is unimpaired.

Our test yacht had an oak interior and, along with the multiple cabin roof hatches and hull portholes, it was very light inside. A large saloon table with centreline seat makes the interior cosier. The Dufour has handrails galore overhead and strong fiddlework on all cabinetry. As part of its luxurious look, all metal handrails have a soft
leather wrap around. Headroom throughout is two metres, not too high and not too short. The central passage is offset to starboard
to match the door through to the master cabin. The galley is split forward of the saloon. This is a smart move, I think. Given there is
another cooking area on the transom it is not so necessary to have the galley in its traditional place near the companionway. Again this opens up all sorts of options for interior design.

FORWARD OF THE MAST

Having a galley that stretches across the hull means you have plenty of storage on the forward bulkhead while the galley width can be quite tight to keep the cook secure. It includes a three-burner stove/oven against the port hull and a microwave, two refrigerators, separate wine fridge, deep freeze and a microwave on the starboard side. Plenty of bench space and enormous amounts of cupboardry for all shapes and sizes of kitchen necessities.
Three wide, non-opening skylights cross overhead of the galley with two opening hatches in-line longitudinally aft of that. There is a nice
touch of a couple of Dorade vents over each side of the galley. Owing to the skylights these do not sit directly over the work area but would still provide some welcome fresh air.
A separate navigation seat and table sit facing forward on the starboard side. This means the head cabin aft of it is just a toilet and is accessed only through the starboard aft cabin. But it is good to see a proper-sized nav. station.
The port side head, with the extra space, is more spacious so it includes the shower with good elbow room. It is closed in with the toilet so you have a seat to use when showering if you want. There is door access from both the main cabin and the port aft cabin.
Both aft cabins are wide and airy, including hull windows and cockpit hatches; plus the continuing 2m headroom. There is loads of
storage room for hanging as well as stowing, Access to the transom area is via the starboard cabin where the genset and watermaker and any other such options may be included. In the main saloon it will seat seven to eight due to the inclusion of the centreline bench. The starboard bench would seat a further two. The table in the test yacht was hydraulic to form a spacious double bed and the 2m starboard bench would make a comfortable berth as well.
When the sun goes down, efficient LED lighting kicks in. There are all manner of options, including under the furniture to light
up the floor.
Our test yacht has the pop-up television installed aft of the galley in the starboard side. There are five different interior layout styles,
although two are suited to charter work with separate crew cabins. Our test yacht has the master cabin head/shower split forward of the mast bulkhead. This means plenty of room in each cabin and two people can clean themselves up instead of one waiting for the other.
As noted, Dufour were looking for a production yacht that could compete on the larger-sized market in terms of performance and
quality, yet at a production yacht price.
Given Dufour barely ever gets anything wrong, the Exclusive 56 certainly hits the mark and definitely adds to the marque.