The Dufour 61 and the Dufour 470 have been nominated in Sail Magazine’s 2022 Boat of the Year Awards. The two new models by the Dufour Yachts shipyard are among several other production yachts in their “Monohull Yachts” category, with the winners to be announced in January 2022. 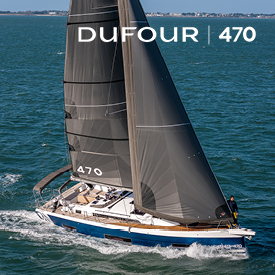 Unveiled in tandem with the Dufour 61, the Dufour 470 is no less impressive a boat, despite its more diminutive LOA. As has been the case with a number of other Dufour models of late, the boat is available in three different versions: an “Easy” version with a simplified deck plan that will likely prove most popular in the charter market; an “Ocean” version with upgraded sail controls for cruisers looking to get the most they can out of their jib and main; and a “Performance” version for those interested in racing. Created by Felci Yacht Design, all three versions feature an expansive cockpit, complete with an outdoor galley, twin helms and plenty of room for relaxing or grinding winches, depending on your preference. The hull is infused with a PVC foam core and a vinylester barrier coat to ward off the threat of osmosis. 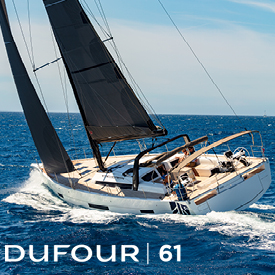 Dufour’s new flagship, the Dufour 61 promises to be a truly spectacular yacht, with luxury to spare and speed to burn – all in a package that has been made as simple as possible for shorthanded crews to handle, whether daysailing or on passage. A plumb bow and slightly reversed transom maximize sailing length, while a deep, semi-balanced spade rudder and T-keel ensure sail-carrying ability. An A-sail can be flown from a fixed combination anchor roller and sprit forward. Aft, the cockpit, which includes a pair of spacious helm stations, looks to be absolutely magnificent, both for those working the boat and those working on their tans. The mainsheet runs to an arch, keeping it well out of the way of guests and crew, and the drop-down swim platform reveals a spacious dinghy garage. Expansive ports and hatches in the low-slung cabintrunk combined with multiple hull windows ensure plenty of ambient light belowdecks.