Comfort, speed and a whole host of options, Dufour’s 530 has it all, discovers Sam Jefferson, editor of Sailing Today with Yachts & Yachting. 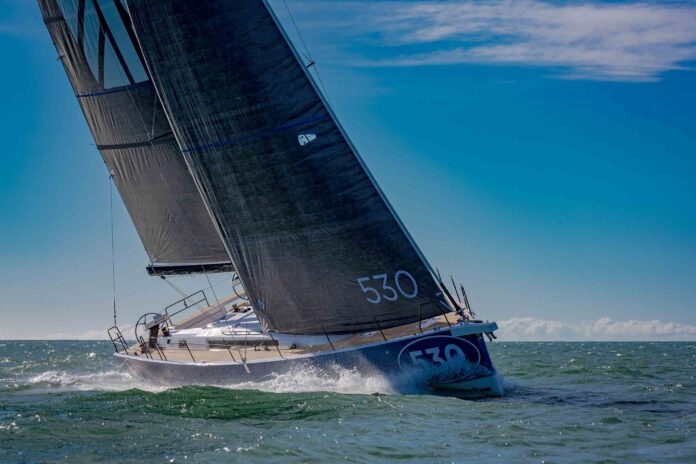 The freedom to make decisions for ourselves is one of the foundations of modern western culture. Sometimes too much choice can be a bad thing, but generally, we all agree it’s for the best. All of which brings me to the Dufour 530 – yes, that’s right, this boat is arguably the ultimate demonstration of all that is great and good about liberal democracy. Alright, I jest, but it is an example of how the big boatbuilders are wrestling with the concept of trying to provide customers with plenty of choice while also providing value for money.

You see the whole problem for the big boatbuilders is that they can’t really afford to provide masses of choice. They have to look at the bottom line, which essentially means turning out a lot of boats quickly and efficiently. To do that, you can’t afford to be pandering to the needs of each individual customer.

Dufour has come up with its own solution to this problem by offering its new 530 in three distinct versions: Easy, which is aimed at the charter market; Ocean, for the cruising family; and Performance, which is a bit more sporty and could be raced.

By providing three very distinct packages for its customers, Dufour cuts out on a good deal of the general faff that comes with catering to general customer requirements because the options are already there in the DNA of the boat. To add to this feeling of extra choice, the manufacturers have also opted to offer an unusually high range of five different interior layouts. 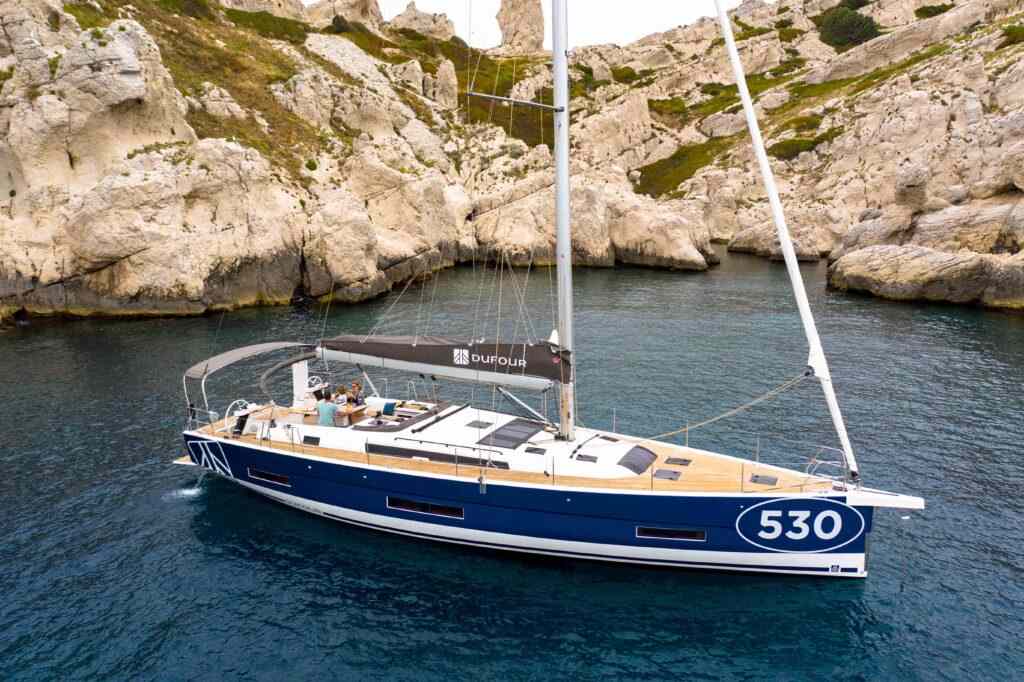 This is the first yacht designed since Dufour joined forces with multihull manufacturer Fountaine Pajot to become among the biggest boatbuilders in the world. For all that, there’s nothing too revolutionary on show here. The boat is designed by Umberto Felci, the Italian designer who has been their go-to guy for some years now. He has stuck with a tried and tested formula of delivering big volume by having masses of beam carried well aft; a move further accentuated by the addition of a chine in the aft sections.

Although 53ft overall, the length on the waterline is 50ft and the hull form is instantly familiar; plumb bow, straight transom, and purposeful looks. There is a single rudder and the option of three different L-shaped keels; 6ft 4in, 7ft 6in and 9ft 2in deep respectively. Although the sail area is generous, this is far from a stripped-out racer even in Performance mode. It is what you’d expect it to be: an extremely roomy cruising yacht with a decent turn of speed.

On deck
As you’d expect from a yacht with a beam of 16ft 6in, the cockpit space is substantial. I probably shouldn’t go any further before mentioning the barbecue/sink/kitchen area on the transom, which has become a bit of a Dufour trademark over the years and offers a more sociable option for cooking in warmer climes. This is integrated into a pod set right on the transom and means that you can prepare food while standing on the bathing platform. Combine this with the flip up seats either side of the helm and you have a good feeling of enclosure compared to some other yachts in this category. 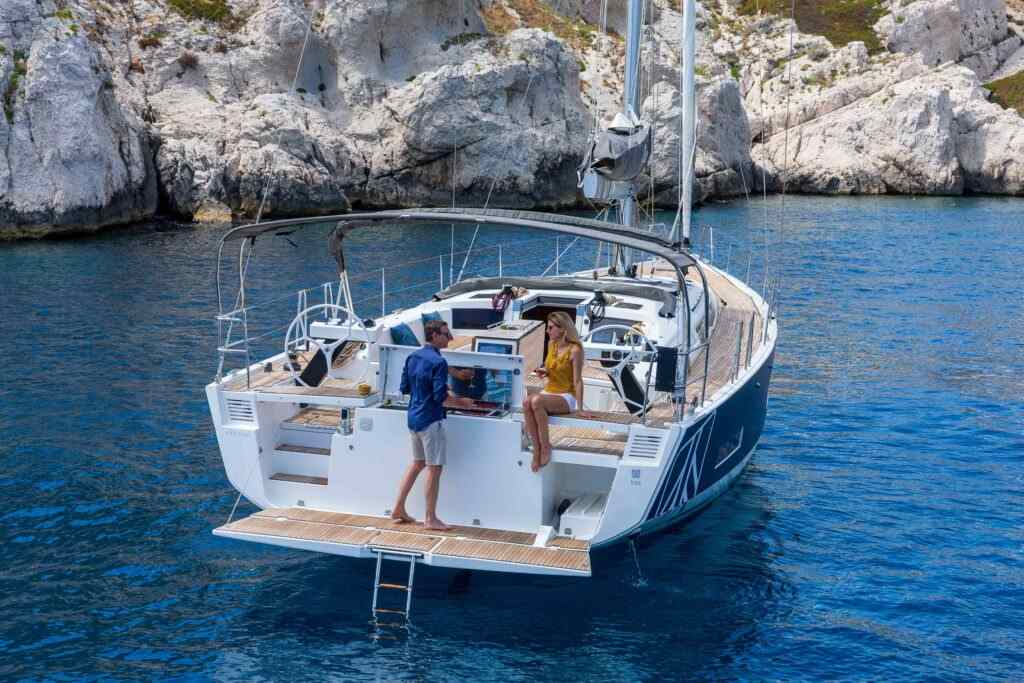 The problem of where to put the tender is dealt with thanks to some telescopic davits set on the transom. With the helmsman’s seats flipped up, access to the bathing platform is also good. There is a space to store a liferaft behind the bathing platform.

In the cockpit there is acres of space. Perhaps the most notable demonstration of this is that, just forward of the outdoor galley and plumb between the two helming stations, is a very comfortable lounger. As you can imagine, that can only be achieved on a yacht with masses of beam. This lounging area is optional but certainly makes for a very comfortable cockpit.

In terms of sail controls, the mainsheet is sited on the coachroof, although this changes if you go for the Performance option – in which case it is sited between the helm stations.

There is also the option of the German mainsheet system. Other than that, the running rigging is led through the coachroof and coamings via channels and emerges near the helmsman. There is a handy rope bin that also serves as a step up onto the side decks and keeps things simple. Moving further forward, there is a big single cockpit table with a fridge set into it, plus more than ample seating. The split bimini is also a clever touch which allows you to exit the cockpit without bashing your head.

Step forward and the broad, flat coachroof offers a huge sunbathing area where you can attach cushions if you wish. Up forward there is an optional crew cabin plus its own heads, which is impressive. This space could be used for storage instead should you wish.

Down below
Step down below and there are two words that spring immediately to mind; light and space. There is a simply cast number of hatches on the coachroof plus big portlights that ensure that the 530 is incredibly bright down below. Throw into the mix the light wood finish on the boat I tested and you have an impressively airy space.
Speaking of space, there’s a heck of a lot of it down here. As mentioned, there are various different layout options available and, given that there are so many, I’m not going to make this article a novel by listing them all. Suffice to say that in it’s most expanded form – optimised for the charter market – it’s possible to sleep 12. The layout itself is rather pleasing, with Dufour opting for an athwartships galley set well forward, which is well set up and combines a feeling of space with excellent bracing positions in heavy weather. The criticism sometimes levelled at a forward galley is that it is detached from the cockpit and this can be a pain. On the 530 though, that matters far less because there is a second galley in the cockpit.

The great benefit of this layout is that it makes stepping down into the saloon a real pleasure, as you are immediately in a nice sociable ‘living room’ area; the quality of the finish is excellent.

The three cabin version I tested is very spacious indeed. All of the cabins were ensuite and the owners suite, set forward, was frankly immense with a walk around island berth. The heads and shower have been split in the owner’s stateroom; a practical bonus as it means you’re not showering in the toilet.

Back aft, the two rear cabins were of a decent proportion, and on the boat I tested there was a split berth to port and a double berth to starboard.

On the water
Test day presented superb conditions, with 15-20 knots of breeze that eventually built, gusting 23 knots. We sailed out of La Rochelle; conditions were initially flat but as we sailed out toward Fort Boyard, things became increasingly lumpy.

We set out with full main and self tacking jib. The test boat was the Ocean version so it has 84sq/ft less sail area than the Performance version (which, incidentally, has the option of a carbon rig). In the boisterous conditions we did not feel the loss of sail area too keenly, and it must be said that the 530 behaved magnificently.

I was interested to see if a single rudder on such broad hindquarters might be lacking in grip, but this was not the case. In fact, the boat was absolutely in its element. This is not a light boat, but it was extremely easily driven and it felt powerful, inspiring supreme confidence even when somewhat overpressed in the gusts. 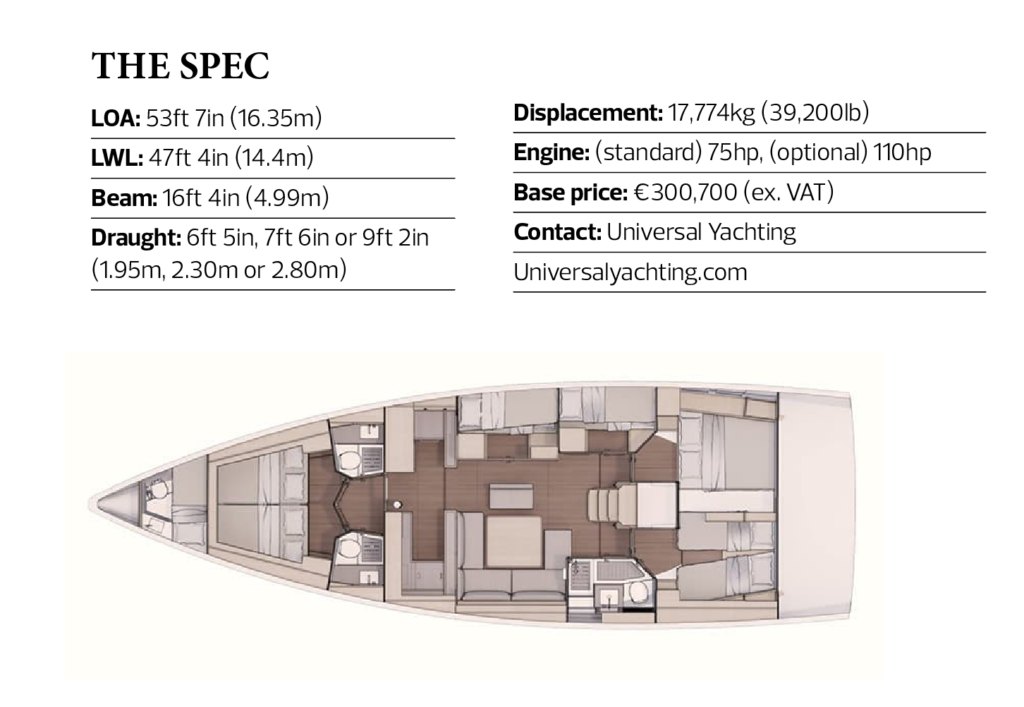 There was minimal weather helm but just enough to keep you interested. Meanwhile, the self tacking jib meant that sail handling was a breeze. The helm position was also sensible and extremely comfortable. Our speed rarely dropped below 7.5 knots, at times touching 9 just off the wind. It was exhilarating stuff and a great advert for modern yacht design as we were careering along dinghy style in a yacht loaded up with all manner of paraphernalia.

Under power, the 530 was – predictably – well behaved and the option of stern thrusters to augment the bow thrusters would make it even more so.